After watching Heroes (the TV show), I believed that every human being had a super power. I would ask my friends what their special abilities were and it would make for wonderful evening banter. Those who did not know were of course enlightened by yours truly. I told them to be patient because sooner or later the secret would be revealed. I knew this because that is what I did. I had the ability to identify super heroes and their special gifts. That was my super power.

Dave has some special abilities as well. Besides being the guardian for ‘Devil’s Spit’, a sinful interpretation of barbecue sauce straight from Hell’s Kitchen, he can find special people and identify their super powers. So we are not much different, Dave and I. The only difference is that Dave actually went out and did something about it.

Dave scoured the corners of the Earth to find special people with secret powers and brought them all back to the mystical Land of the River next to Dubai Parks and Resorts. It is there that he set up Famous Dave’s Barbecue restaurant and started to serve racks of lamb and beef short ribs to hungry travellers from far and wide.

OK, so that is not exactly how it happened. Dave did not scour the corners of the globe. All the people with special powers were already in Dubai because of course that is what Dubai is all about. All Dave did had to do was to find them like Professor X and put them to work in the restaurant.

Take Famous Josh for example. When he was in the Philippines, he beat the entire country at chess and was given a 75% scholarship to finish his education because of his special skill. Then there is Famous Miro, also from the Philippines. He was one of the country’s best break dancers and was the lead back up dancer for Mark Herras, a famous singer and celebrity. In short, every single person working on the floor at Famous Dave’s restaurant is already famous for something. How cool is that?

So what happens when you put all these famous people under one roof? Well for one, the service was exceptionally brilliant. Remember my review of Ihop when I spoke about the waiters coming to us like programmed robots and asking if our food was good? That did not happen here. We were left alone to enjoy our food and every time we wanted something, there was a famous guy standing next to us, ready to listen. Since they were all celebrities in their own right, they liked to talk as well but only when we were ready to listen. We got a detailed briefing on the famous sauces and how they were made. My favorite were Dave’s Revenge and Devils Spit while Mishal liked the Texas Pit.

I had a medium-well 7-oz fillet which was a lean cut steak seasoned with coarse salt, black pepper, cayenne and garlic. It had a wonderful crust which gave way to the juiciest bit of meat you can imagine. As if Dave’s selection of sauces weren’t enough, I asked them to make my steak cheesy and was provided with some extra creamy white sauce on the side. The skin-on potato wedges were crispy on the outside but moist and fleshy all the way through. This ladies and gentlemen, was heaven. 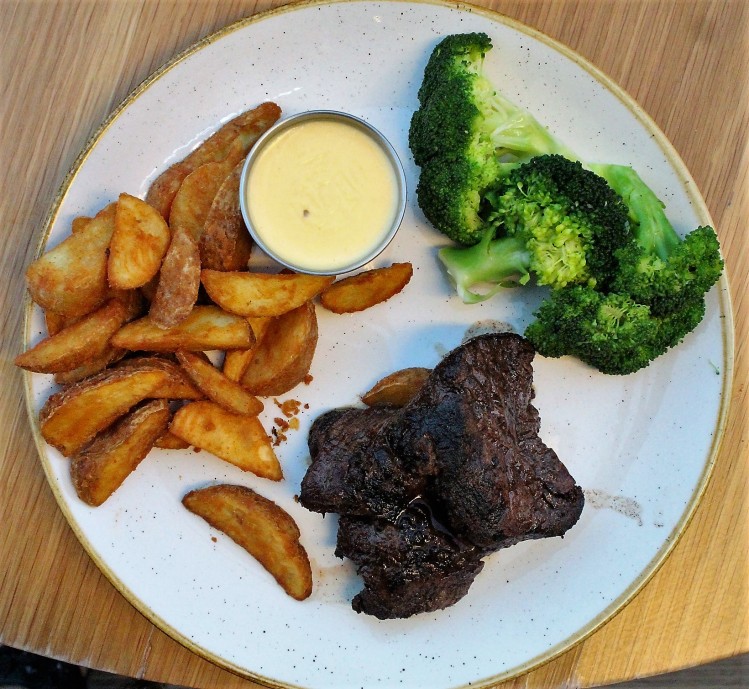 Mishal’s Jacked-N-Stacked burger was a grilled chicken breast topped with Monteray Jack cheese, stacked with crispy onion rings and slathered with Dave’s rich and sassy sauce in a soft open bun.  The star performers of the night however were the grilled pineapple steaks. I will never be able to look at a pineapple the same way again. For me, the only way to eat a pineapple now would be to season some juicy slices with cayenne pepper and a hint of brown sugar before tossing them on the grill for a touch of sweet heat. The cayenne would start the show with a fiery kick and the caramelised brown sugar would follow to compliment the tart sweetness of the fruit.  Try it the next time you get the bbq going and who knows? You might end up being famous too. 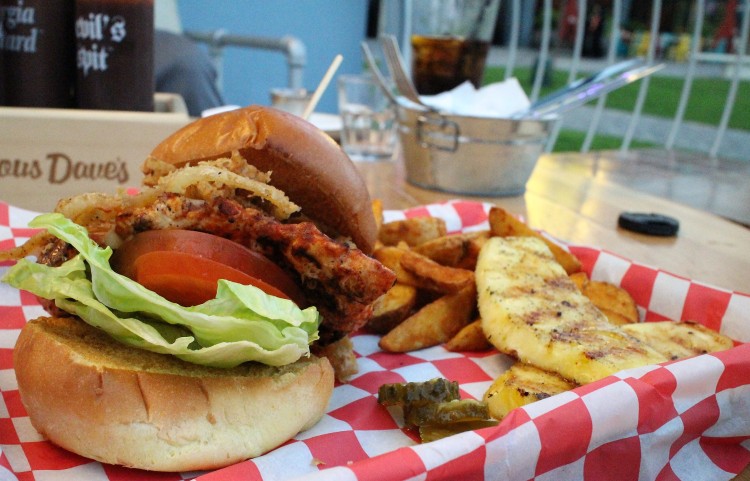