Every time someone says “GF Ferre”, I imagine super skinny men and women with chiseled jawlines strutting their stuff down a ramp somewhere at the Dubai Design District. The last thing I can think of is food. There is in fact an emotion of immense regret that takes over. I feel guilty for the last meal I had. My mind calculates the number of calories consumed on that day while simultaneously trying to figure out the number of meals I would have to skip to balance my impulsive eating habits.

That seldom happens though. I don’t skip too many meals. I just eat whenever and whatever I want to. As long as I make sure I don’t hear the names GF Ferre, Roberto Cavalli or Georgio Armani anywhere close to meal times, I am ok. All of these brands that remind me of super skinny people and make me feel accountable for every calorie I consume, also operate restaurants in Dubai. Ironic, is it not?

So now you know how I feel about dining at a restaurant that shares its name with a fashion label. That is precisely the reason I never stopped at the GF Ferre chocolate bar, despite secretly admiring its sunlit location at the MOE Fashion Avenue every time I passed by. I did always wonder why they added the word ‘chocolate’ to the name though. It kind of made it sound like an oxymoron. GF Ferre Bar might have worked better. No?

As if, accepting the fact that the fashion types actually ate at all wasn’t enough; having to process the fact that they ate chocolate confused me even more. It got to a point where I could hold it in no more and last Friday, I decided to stop by at this place to find out exactly what went on in there.

First of all, let me assure you that there were no fashion models inside. Mostly regular folks like you and me, trying to squeeze in a quick lunch between their shopping or just weighing in on Kanye West’s newfound love for Donald Trump over a bottomless mug of coffee. A part of me may have been slightly disappointed for not being able to spot any fashion types but I was mostly relieved. This was just another Friday in just another Dubai café. 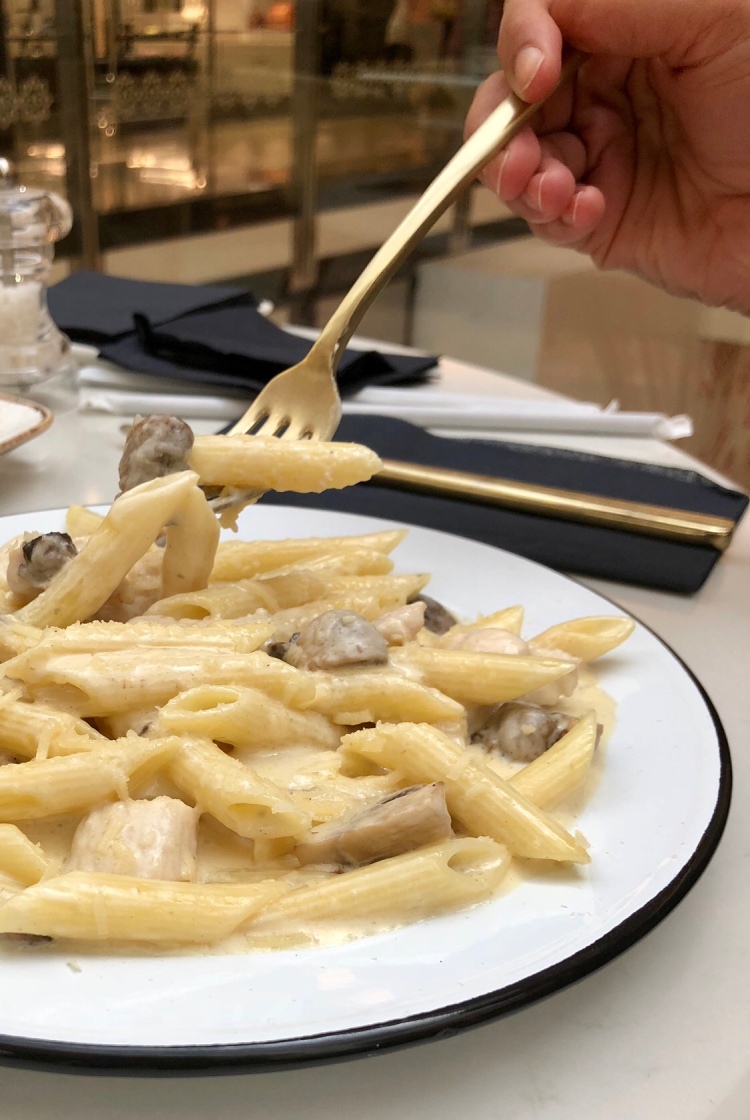 Next, we had what could have been your average pasta with sautéed chicken, mushrooms and creamy white sauce but it was not. I could immediately taste the distinct Parmigiano Reggiano flavour. It takes at least 24 months to make this cheese. This long period of maturity and the special diet that the cows are fed on give this cheese its unmistakable aroma and flavour. This meant that work on this Penne Alfredo started at least 2 years ago. Let that sink in for a while. Now, let me tell you that it was almost worth the wait.

The Hell Boy was definitely one of the better-looking beef burgers I have ever seen. Part of it was due to the red beetroot sesame bun but part of it was due to the fact that it was so darn cute! It had a double beef patty, topped with caramelized onions and smothered with old fashioned American cheese. Taste wise, it was pretty good but not good enough to make my BEST 11 BURGERS IN DUBAI list and let’s just leave it at that.

Now that guilt I spoke about earlier was starting to set in so I decided to order a salad too. I realized later that the trick to eating like models was to order the salad instead of the main course and not in spite of the main course. I was really glad I ordered it anyway because it ended up being my favourite dish of the day. The Oganic Quinoa with Grilled Chicken had a unique flavour which I could attribute later to the sumac and chives. The feta added a creamy texture while the hazelnuts and pomegranate added a well needed crunch whenever it was needed. It also had grilled onions, baby spinach and the most amazing pickled beetroot to wrap it all up with a tangy aftertaste. If this is what fashion models ate, sign me up please!

The Banofee milkshake was almost as would be expected but I think I tasted some Lotus biscuit in there somewhere. Cheeky move, right? The Passion Fruit Mojito was made of muddled lime, ginger and fresh mint mixed with passion fruit bits and ice, which was then topped with sparkling water. The ginger was what made this drink work but I did wish they had added a bit more passion fruit in there. It was also quite limited in quantity but I figured that’s how much fashion models are supposed to consume so I pretended to be really happy with it. Next time, I may just stick to the diet coke.

So, my final thoughts are that yes maybe fashion brands can operate restaurants and perhaps their natural creativity may help them in coming up with some brilliant dishes at times. They are probably a lot better at making salads then they are at making burgers but when they do make a burger, it will be like an edible work of art. I also realized that fashion types don’t necessarily starve themselves to lose weight…..and neither should you.