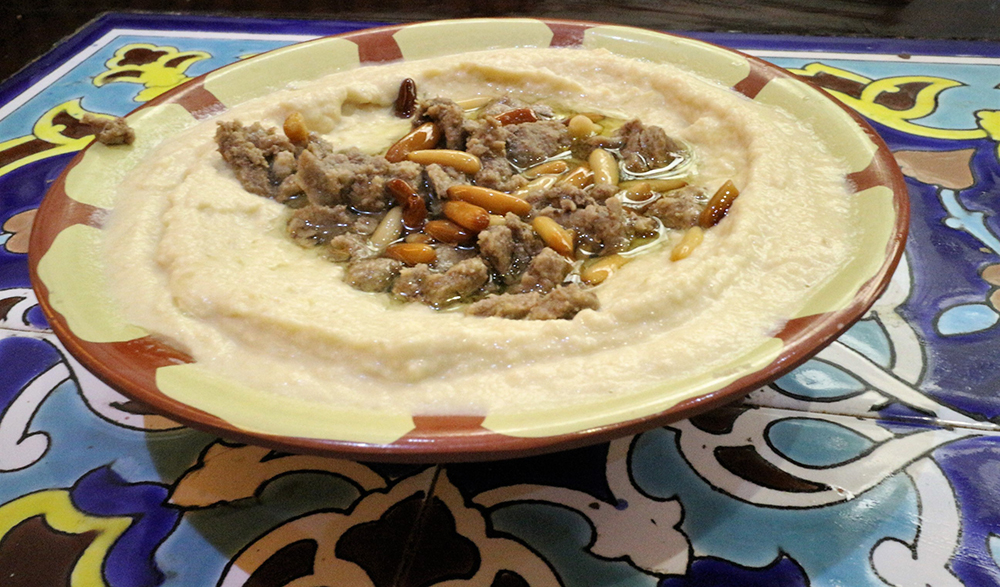 The blue motif at the centre of the table reminded us of an ‘evil eye’ charm which we received from Tehran as a gift but had also seen being sold on the streets of Istanbul.

Going through the menu was déjà vu all over again. Like Turkish food, Iranian cuisine is dominated by grilled skewers of lamb and chicken so we felt we knew what we were getting into. I am not sure how the two cultures influenced each other so much because the Ottomans and Pesians didn’t really get along that much throughout history. Anyway, it wasn’t just the Turks the menu seemed to be inspired by. While Lebanese influences were apparent in the appetizers (hummus, tabouleh and mutabel were listed) there was also a chicken boti on the menu which is an Indian/Pakistani boneless chicken tikka.

Thankfully though, most of the menu consisted of authentic Iranian Dishes and we did not order anything that could have interfered with our Iranian experience; well other than the hummus of course. I would have skipped it if I could have had my way but seeing how Mishals eyes lit up upon reading the word hummus, I dared not tell her that it had nothing to do with Persian cuisine.

So the hummus was slightly thinner in consistency compared to the Lebanese kind and had a sharp lemony zing to it. We had ordered the hummus laham (hummus with meat) but it also came with sanober (pine nuts) which would be a completely different kind of hummus at a Lebanese restaurant.

We ordered skewers of lamb and chicken mince kebabs, lamb and chicken tikkas and lamb and chicken yoghurt kebabs. To me, ordering the same things twice seemed like a waste of time but since the only kind of animals Mishal eats are the ones that have feathers on them, as always we had to order the chicken as well.

Compared to Pakistani mince kebabs, these seemed a bit dry to me but they had minimal spices so we could actually taste the meat. It worked great for the lamb but I don’t think you really want to taste the chicken mince unless you are fine with tasting some feathers, chicken fat and maybe a beak as well. Both the lamb and chicken tikkas were also a bit dry to my liking but the yoghurt kebabs made up for that later. Marinated overnight in yoghurt and black pepper, yoghurt kebabs are extremely popular in Southern Iran and we could see why. The winning dish of the night was the chellow khorosht bamia which was a boneless lamb and okra stew mildly spiced and cooked in a tomato paste. Think of it as a Persian goulash served with white rice. I found the dough (pronounced doug) to be particularly refreshing and highly recommend it. It was a drink made of fresh buttermilk, salt and dried mint. The plastic covered menu was not too classy and took away from the effect they might have desired to achieve.  It might as well have been a  food court joint and and no fancy tables with blue motifs were required. The coloured pictures of the food made a lot of sense though, considering that none of the waiters spoke any Arabic. Service was fast but our orders were mixed up twice (despite the coloured pictures). Not bad for a quick meal if you are at Dubai Mall and provides a good insight into the world of Persian kebabs. Not sure if my craving for authentic Persian cuisine has been satisfied though. I think I will keep looking.