Don’t be fooled by the name. This is not some random bloke selling cabbages and cauliflower at the corner of your street. This is a kitchen factory with a storefront that could humble a department store and a menu that updates faster than Taylor Swift’s boyfriend list. This is a super restaurant if there is ever such a thing; I’m still not sure who Jones is though, neither were any of the 5 waiters I asked – I think it was his day off.

I loved the open concept floor plan and the huge windows which were letting in copious amounts of light. There was so much activity around that it almost felt like an airport departure lounge with some people grabbing a bite before a flight, some picking up last minute duty free and others talking as if they had another 10 hours to kill.

All the cool kids seemed to be having breakfast (despite it being 1 pm). I would have as well if only had I not done the boiled egg ritual that morning. While I curiously tried to decipher the ingredients of what seemed like eggs on toast on the table 3 inches next to mine (I am creepy like that), Mishal seemed to be eyeing a gentleman who was struggling with his eggs benedict. Anyway, upon agreeing to return for breakfast later since it seemed to be the ‘in’ thing to do, Mishal ordered the seared Chilean sea bass with soba noodles and I went for the grilled Atlantic salmon on homemade babaganoush. 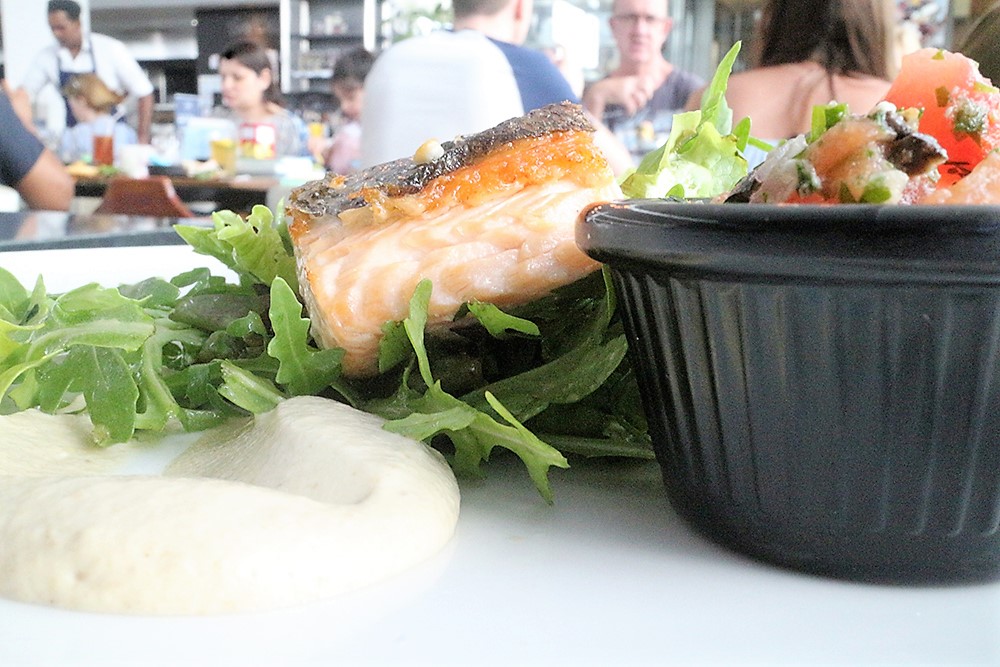 I will get to the food in a bit but first I have to tell you of the most spectacular discovery we made that day. The drinks menu was a bit confusing and our poor waiter could not answer any of my questions. First of all, nobody knew what a ‘fever tree’ was. I asked to see someone who would know since it came in 6 flavours and my wife was about to order one but apparently the only person who could answer that question was not available (could have been Jones himself). Mishal being the adventurous soul that she is still went ahead and asked for an elderflower tonic fever tree anyway but settled for a bitter lemon fever tree later since the former was out of stock. (I think Fever Tree is just the name of the brand but somebody please tell the waiters that)

I was fascinated by a drink that was listed in the sparkling organic juice section. Never had I in my life been presented with the opportunity to sample organic cola juice straight from the mountains of Kilimanjaro. Where the cola fruit was plucked out of mother nature’s bosom and flown to this Dubai super factory in a chartered airplane so that it could be lovingly disassembled to separate the juice from the pod. They must be doing huge volumes though, how else could they justify selling something so rare, precious and ‘organic’ for AED21 per 250 ml bottle.

Anyway, now on to the food. I can safely say that my grilled salmon  was among the best I have ever had. It is amazing how seafood tastes different when it is fresh (or as fresh as it could possibly be after travelling 12000 odd kms from the Atlantic Ocean to Safa). There was a generous slab of fresh salmon that was grilled to perfection on my plate but I couldn’t help noticing Mishal’s sea bass which was served in a bowl that could also have been used to serve ramen but instead came with the most good looking pan seared sea bass that was covered with sesame seeds and laid on a bed of seaweed and bok choy drenched in yuzu ponzu.

The crunch of the thin salmon skin was the perfect compliment to it’s creamy flesh and it seemed to be the only thing that held the fish from immediately melting in my mouth. That along with the feta and olive tomato salad ensured that we kept conversation to a minimum while I devoured the fish.

The sea bass however is what we couldn’t stop talking about that evening and the morning after. The nori (seaweed) added a smoky aroma to the dish while the yozu ponzu dressing added a savory, sweet and citrusy zest to it. The cashews seemed to be strategically placed in the bowl to clean the palate and prepare for the next flavor. All this sat atop aromatic soba noodles and every single bite was a melange of different flavors and textures. The sea bass itself might have been from South America but the dish itself was undoubtedly from the land of the rising sun.

For dessert we had the salted caramel tart which was the best way to end the meal because our taste buds kept jumping between sugar and salt. We also had the chocolate cheesecake which reiterated the notion that fresh good quality ingredients are the difference between a good and a supercaligragillisticexpiaidocius meal. 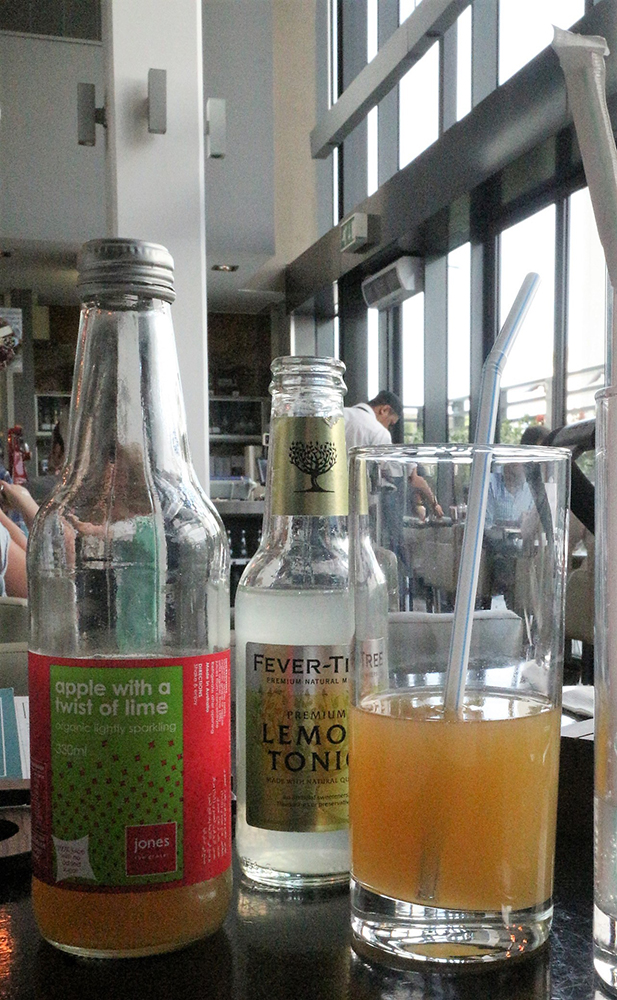