I love discovering new restaurants and talking about exciting new places to eat at but one of the main reasons behind this blog, was to talk about restaurants that have existed, survived and multiplied while others around them barely made it past the first year of operations.

How have some restaurant chains managed to open up a branch in every mall or every neighborhood? What is it, that drives business to these places? What makes them grow? Is it just because of the food or is it the brilliant marketing strategies? Is it the décor and lighting? Or is it just convenience?

Do people keep eating at places like TGIF, Chillis, Applebees, Shakespeare and Co, IHop and Tony Romas because the food is just amazing or is it just because they are familiar with the brand? They all seem to have identical menus and between them operate 20 odd restaurants in Dubai yet they keep expanding and drawing in customers. All this while Pedro your brilliant neighborhood chef, couldn’t keep his bistro afloat because of liquidity problems and lack of customers. There may be more than one reason for all this but I decided to go back to one of the best known chain restaurants in Dubai to try and figure out the secret formula to success.

I may have already been to every single Chillis branch in Dubai so we decided to meet some friends at Yas Mall for lunch at which is arguably the UAE’s most successful (non-fast food) restaurant. We managed to find a table with views of the Ferrari World roller coaster and were seated in a heartbeat so full marks for that. The order taker seemed to be well rehearsed, helpful and knowledgeable so that part was smooth as well.

We ordered the Melted Pepper Jack Ribeye, Margarita Grilled Chicken, Ancho Salmon and the Beef Enchiladas. Of all these dishes, the steak definitely stood out.. Medium cooked and lightly seasoned, just the way we like it. Initially, we weren’t too sure about the cheese topping but after taking a bite of the thick cut steak with the melted pepper jack, we realized that it was a potent combination.

The only other dish that came close to that was the Ancho Salmon. It was cooked all right and seasoned just fine but I wish I could say that about the other two dishes. 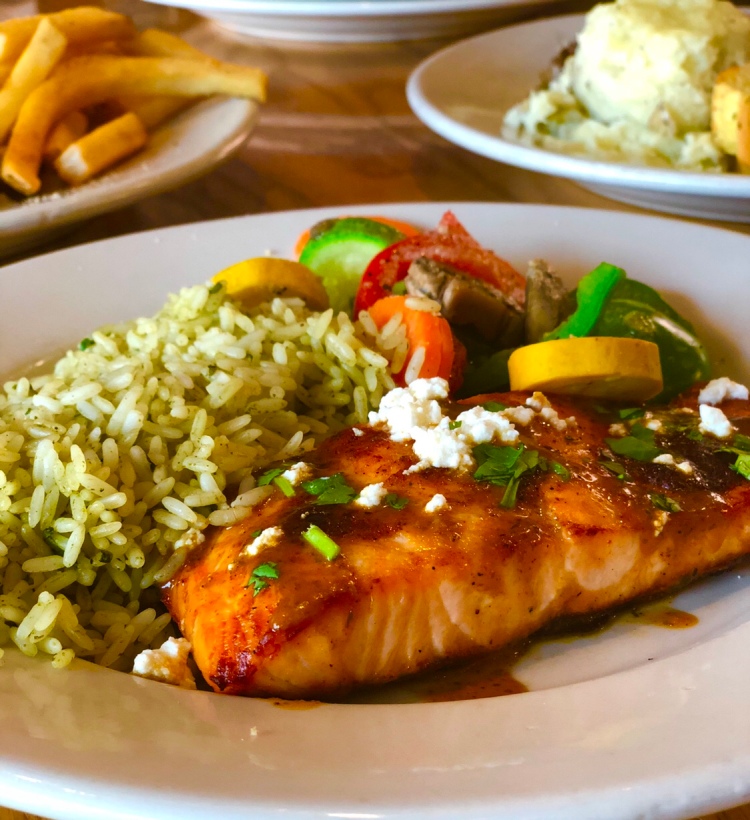 This was the description of the chicken margarita in the menu: Tender, juicy chicken breast, marinated with our classic Margarita flavoring and grilled to perfection. Served with citrus rice and black beans.

Yes, it was tender and it was juicy and it was served with black beans. That was about it. The Margarita flavor (whatever it was supposed to be) was not there. In fact the flavor was the taste of grilled chicken which we had to season with some salt. I had imagined a tomato purée of some sort (as in the pizza) smothered over the chicken for it to warrant that name. It did have some chopped tomatoes on the side but that was about it. Oh and the citrus Chile rice sounds like it would be infused with lemon zest or something right? No, there were no signs of any lemon anywhere. Just some rice, minus the citrus.

Think of all the Mexican flavors you can imagine when someone says Taco seasoned beef. It was nothing like any of those. This was every Mexican foodie’s worst nightmare. It was so bland that they would build a wall around their borders to keep it out of the country. It was basically a wrap filled with salt flavored ground beef and cheese, topped with some cilantro. Sure, it was good looking and was overflowing with black beans from all sides but tasted a bit like a beef cheese wrap. Nothing more, nothing less.

So here is what I think I have learnt from this excursion to the land of Chillis. The photographs in the menu were mouthwatering, the seats were comfortable, the staff was friendly and the descriptions of the entrees were brilliant. So full  marks for packaging and presentation and all of that. The food looked pretty when it arrived and there was a lot of it too. It just lacked heart. I wouldn’t be surprised if it was put together on an assembly line like McDonalds. This seemed like a place where everyone follows the process but nobody has ultimate responsibility and nobody really cares. A place where nothing is personal. They probably believe in the mantra that ‘If you build it, they will come’ hence the multiple locations in every city. They also seem to know that the bigger and flashier you are, the more likely you are to succeed.

Unfortunately, the restaurants which have perfected this process are the ones that are thriving. They will expand while Pedro, your friendly neighborhood chef who prepares each order with care and personal attention will struggle. We can say it is the marketing prowess and easy flow of money that enables these places to open swanky new branches all the time but in reality it just comes down to one factor: YOU. You decide who stays in business and who packs up. You and I are ultimately the reason Pedro is having a hard time. Want your food to be prepared with a bit more love? Take a stand, stop eating at these food factories. Support the little guy at the corner of your street. As for me, all this writing is making me hungry. I think I’ll get Hardees for Lunch today.