Whenever someone says Indian vegetarian, the first thing that comes to mind is a huge round platter (thali) with little bowls of assorted vegetarian curries and pulses, some rice, possibly some bread and a dessert all served at once, on the same thali.

Rajdhani Street serves traditional Indian dishes as well but since this is not your average vegetarian restaurant, there was a lot more going on than I could have imagined. We were served  magic potion’s in what looked like Harry Potter’s drinking glasses and green concoctions in test tubes straight out of a sci-fi flick. We even got to try pav bhaaji (thick vegetable curry) straight out of a fondue pot and experienced a dhokla pizza for the first time in our lives. This was a glimpse into the future of Indian Vegetarian food.

I was there at a blogger’s meet and had the pleasure of meeting some really cool Dubai food bloggers while  re-discovering vegetarian cuisine. The only regret was not being able to sample any of the main courses because I was so full on the appetizers. That’s what happens when you get an engaging conversation going on along with an endless supply of really good food. I am pretty sure I will return for the main course at some point but for now, here is a lowdown of the dishes thatI was able to sample.

Dhokla is a food item that originates from the Indian state of Gujarat. It is made with a fermented batter derived from rice and split chickpeas. It can be eaten for breakfast, as a main course, as a side dish, or as a snack. The guys at Rajdhani street made sure you can eat it as a late night takeaway dinner as well by turning it  into the dhokla p izza. Took me a while to get used to it but once I got going, there was no stopping me. I’m not sure if I can ever look at pizza the same way again! 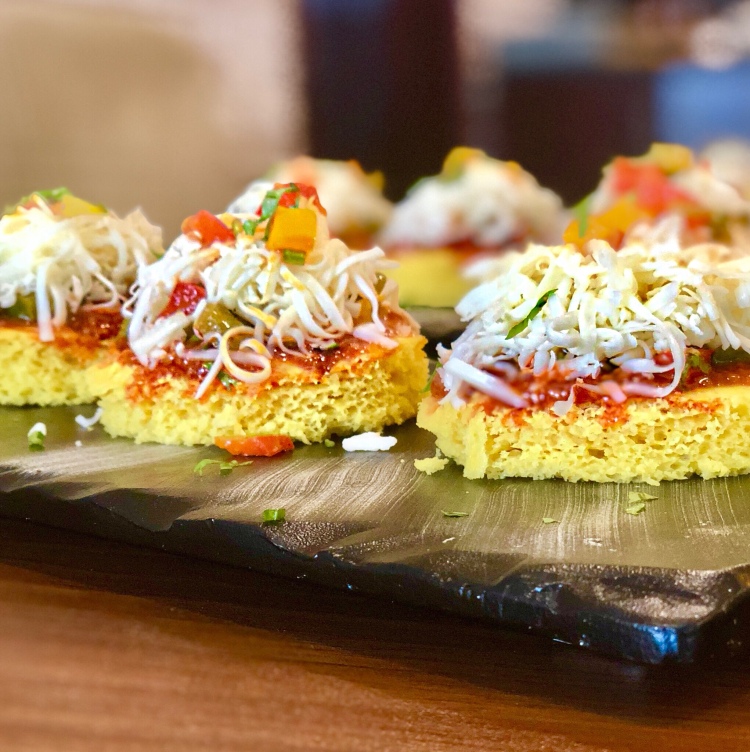 I also enjoyed the paneer ka lifafas which were basically deep fried cheese pockets. Definitely not something you want to be seen around if you are on a low calorie diet but probably the best thing for mindless eating while engaging in a deep intellectual conversation about the future of food blogging in Dubai. A word of caution – they were highly addictive and you could end up stuck somewhere in the space time continuum after having a couple of these puppies. There was a possibility of eventually finding your way back to JLT, as long as you did not wash them down with the Maharajah Lassi or the Malabari Chas.

If travelling through different dimensions is not your thing, may I suggest the  Masala thumbs up, a magical potion from Hogwarts guaranteed to solve all your digestive issues or the Hara Pudina Shikanji (mint lemonade) a refreshing drink served in a tall test tube straight from Dr Jekyll’s lab. 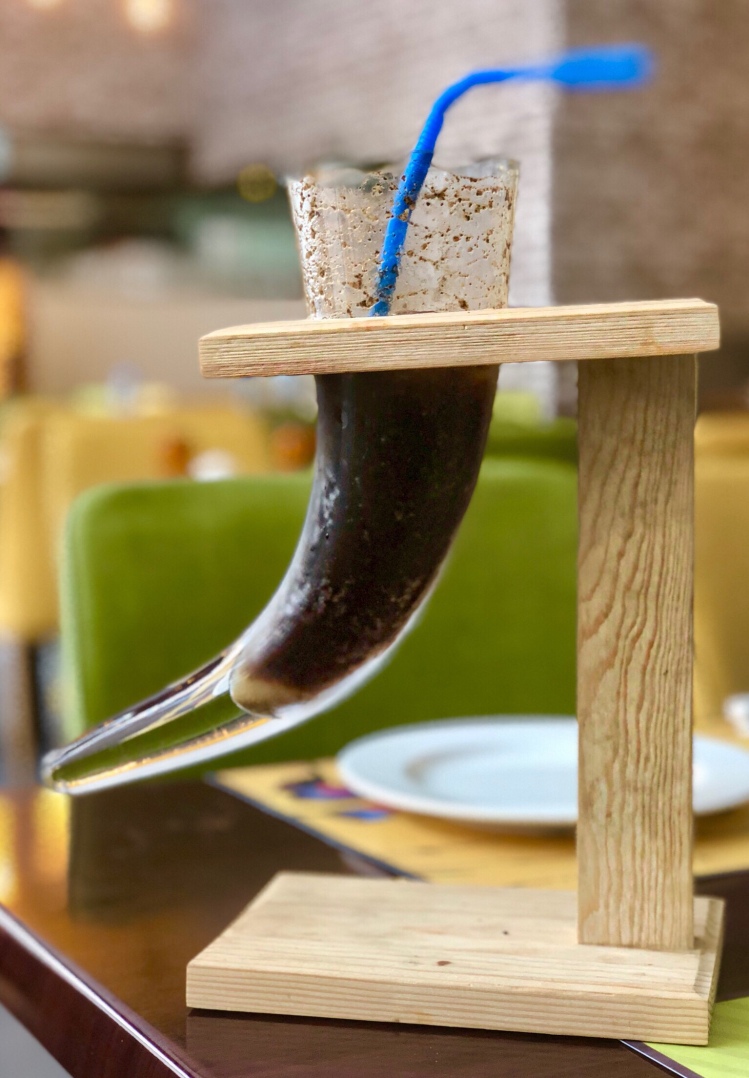 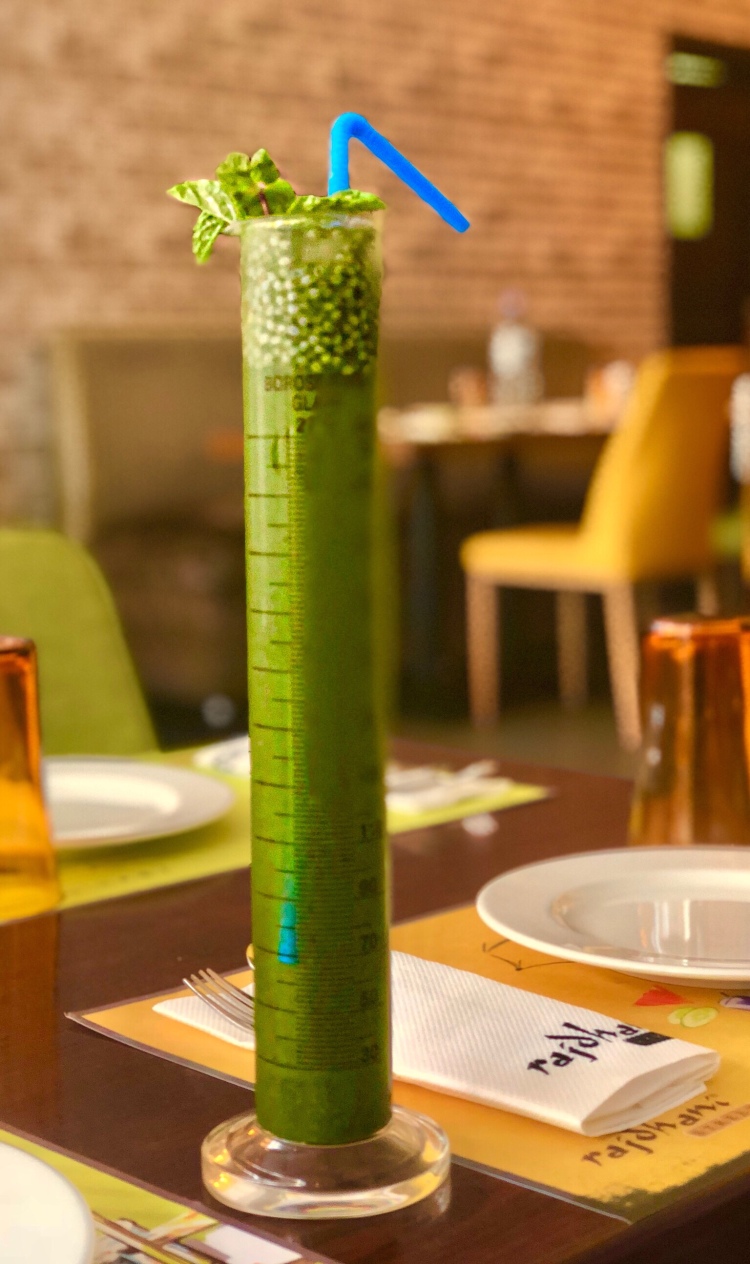 My favourite dish of the day was the pav bhaji fondue. Pav bhaji is a popular street food from India  with many variations in ingredients and garnishes, but is essentially a spiced mixture of mashed vegetables in a thick gravy served hot with a soft white bread roll, drenched in butter. The dish originated in the 1850s as a fast lunchtime dish for textile mill workers in Mumbai.

A  fondue is a Swiss dish of melted cheese served in a communal pot over a portable stove heated with a candle or spirit lamp, and eaten by dipping bread into the cheese using long-stemmed forks. It was promoted as a Swiss national dish by the Swiss Cheese Union in the 1930s. 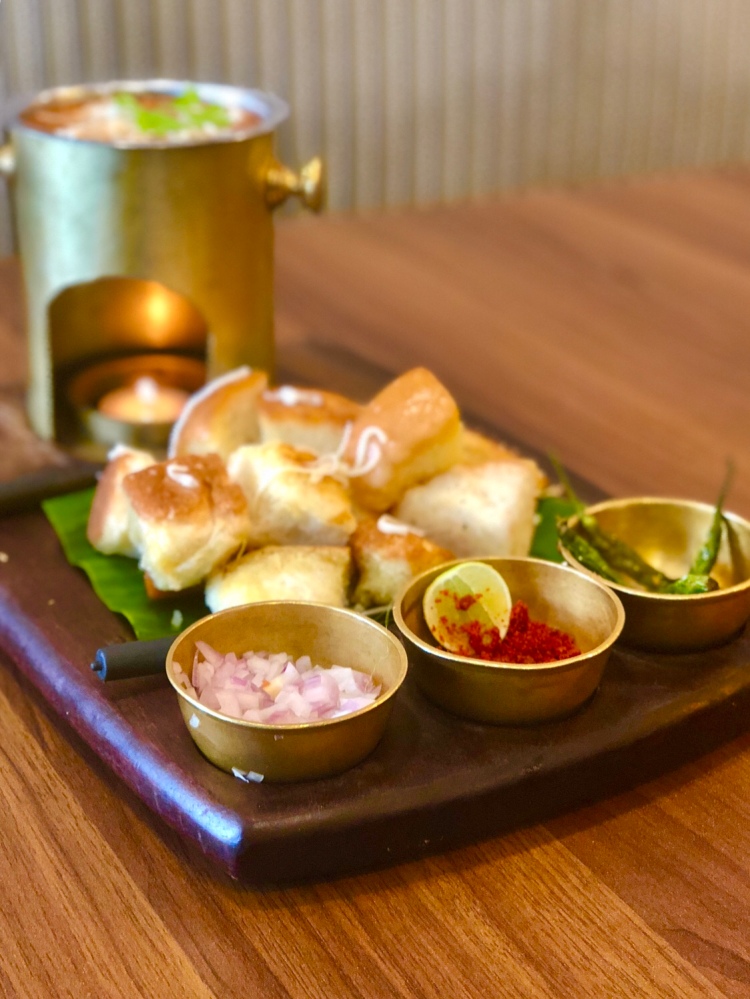 So this dish was essentially the fusion of a decades old Western staple with an Eastern street food classic. It was so good looking that I kept staring at it for a while before daring to destroy the immaculate presentation. The colour added by the spiced garnishes transformed it into something out of a Paul Klee original. It was almost too pretty to eat but when has that ever stopped a food blogger in the past? Sadly, I could not admire it for too long as my fellow bloggers were attacking this dish from all kinds of angles. So I joined in with them and like all good things, the Pav Bhaji fondue also come to an end. With it, the space in my stomach filled up and thus ended a wonderful evening. I excused myself from tasting any of the main courses but promised to go back and sort out my unfinished business.

5 thoughts on “Fun with vegetables at Rajhdani Street.”